European Christmas Markets on the Danube

Cruising on the Amadeus Cara

At this most wondrous time of year, immerse yourself in age-old traditions as you enter into a real Christmas fairytale! Visit the best Christmas Markets along the Danube in Germany and Austria, and discover the delights of the season. Each market has rows upon rows of wooden stalls, all with unique and charming gifts—everything from handmade dolls and figurines to delicious seasonal treats. Each town specializes in its own local delicacies and traditional products. The streets are full of the teasing aromas of delicious mulled wine, baked apples, streudels and pastries, hot chestnuts, grilled sausages and other tasty treats. Unpack once and embark onboard the elegant MS Amadeus Cara, enjoying all the perks of a relaxed cruise environment. Sip fine wines, taste local flavors and revel in the superior service. Imagine yourself cruising on the legendary Danube, exploring the winegrowing region of Wachau, visiting picturesque villages and lavishly adorned cities. You’ll be enchanted by the fun and festive holiday atmosphere of a European holiday tradition that dates back hundreds of years.

A passport is required to travel to this destination and must be valid for at least six months after your return.

A full COVID-19 Vaccination is required to travel on this trip. 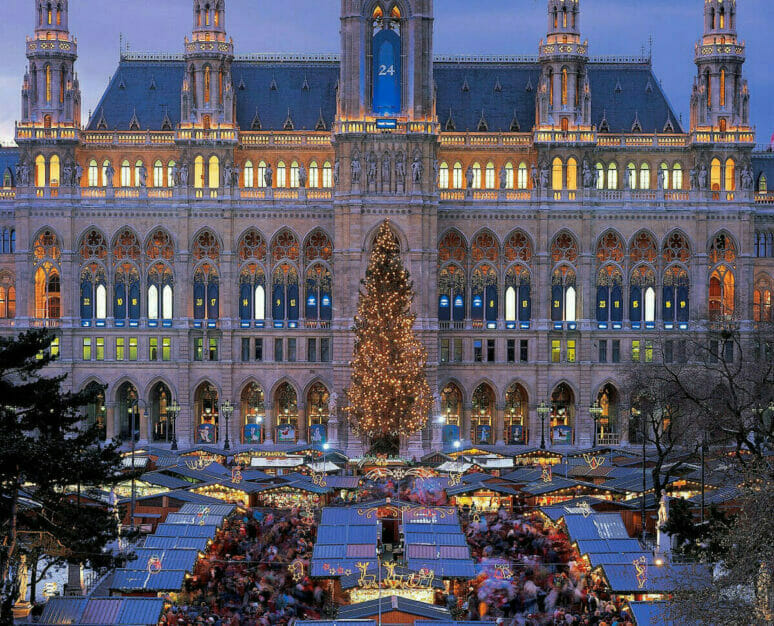 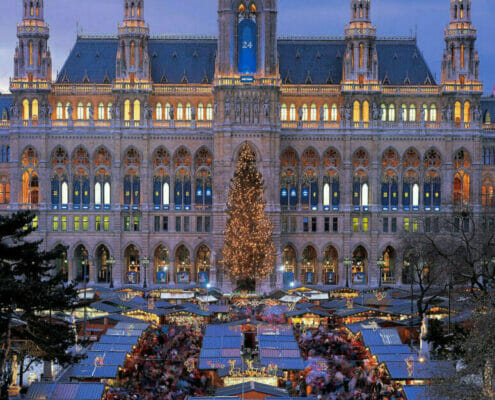 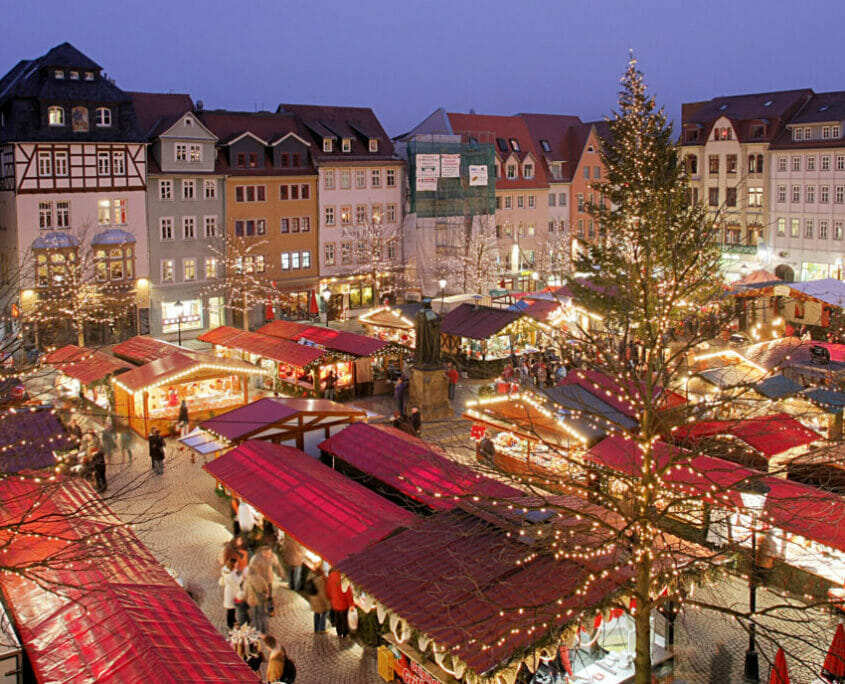 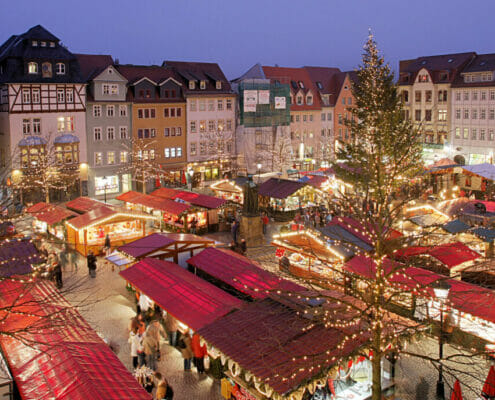 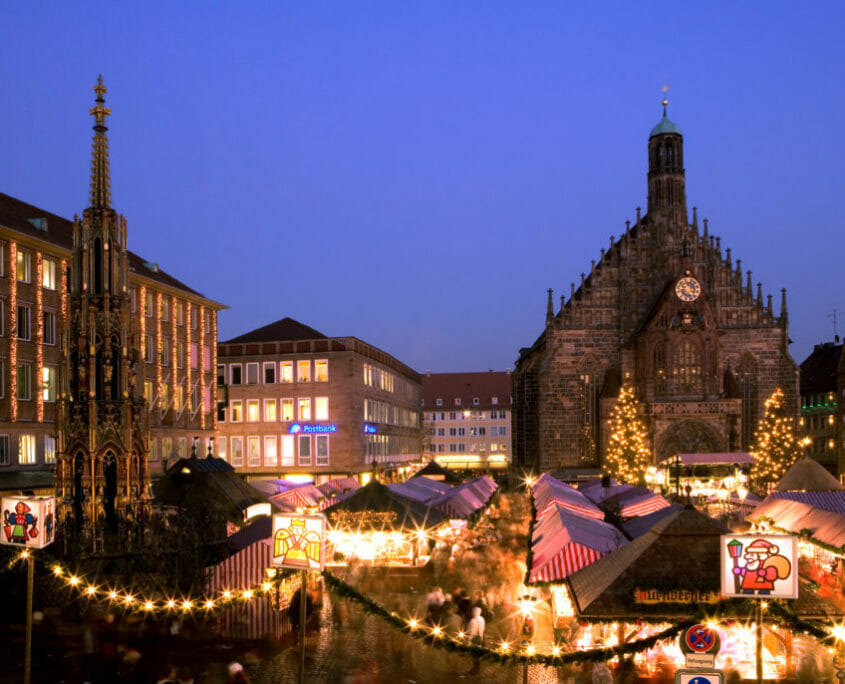 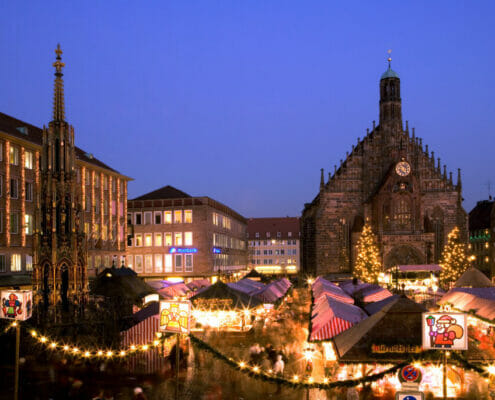 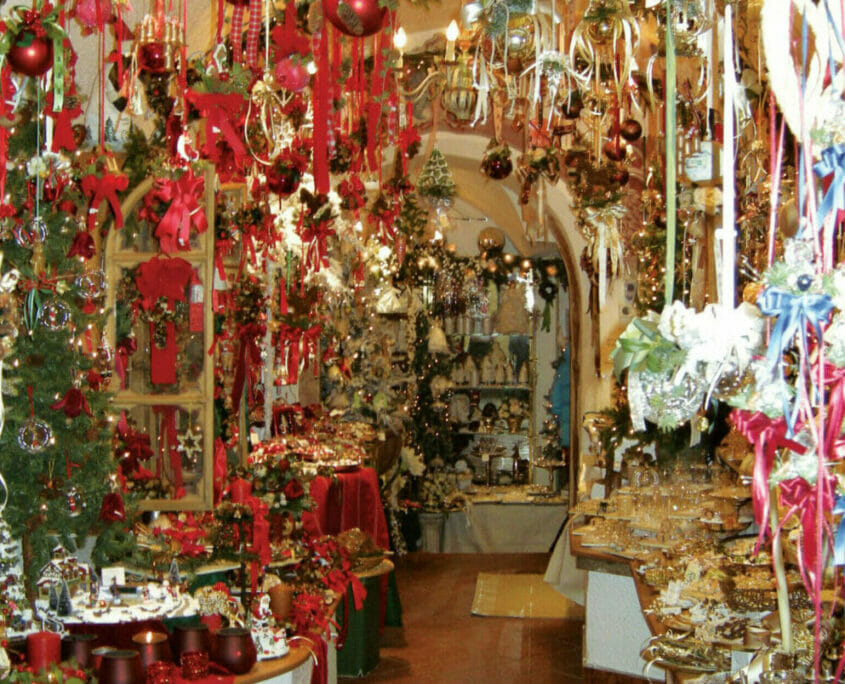 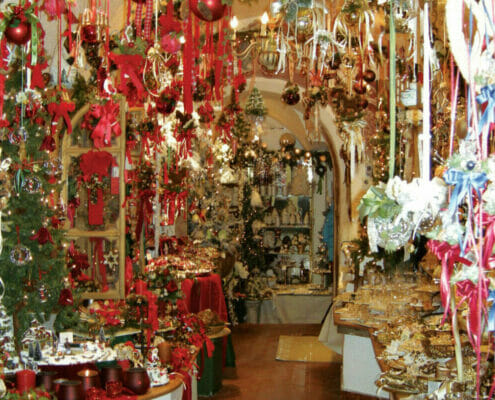 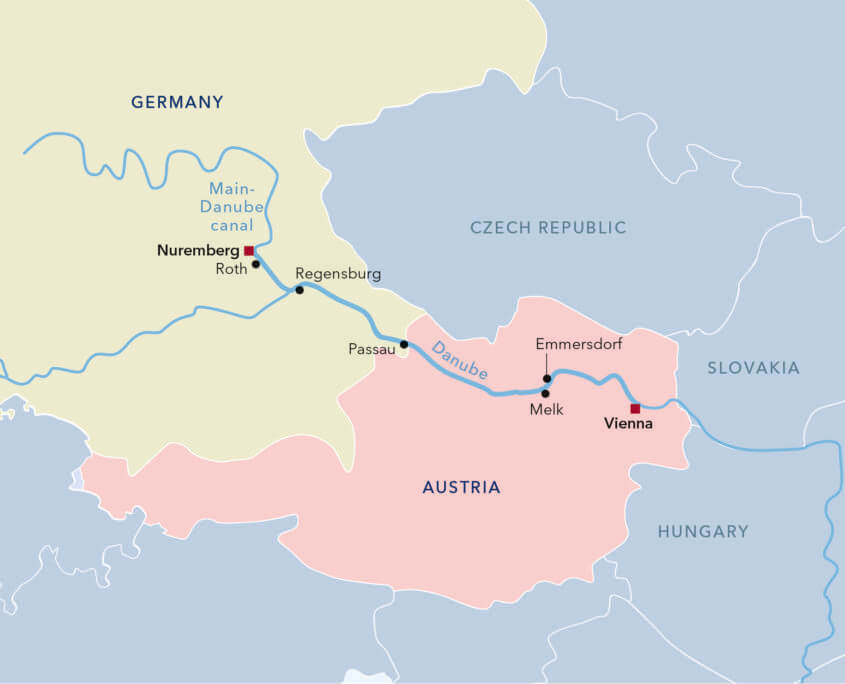 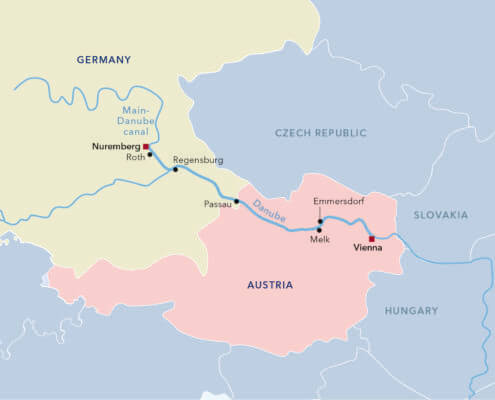 Sat, Dec 3: Transfer to Chicago O’Hare Airport to board your flight to Frankfurt, Germany.

Sun, Dec 4: Arrive in Frankfurt and transfer via motorcoach to Nuremberg, stopping along the way for a meal stop and perhaps a Christmas Market in one of the lovely towns on the route. Board the MS Amadeus Cara and spend some time getting acquainted with your surroundings on this luxurious floating hotel. This evening, join the cruise director for a Welcome Cocktail in the Panorama Bar, followed by a Welcome Dinner. The ship will overnight in Nuremberg. (Meals: Dinner)

Mon, Dec 5: Following breakfast on board, depart for a city tour of Nuremberg. This historic place, once a free imperial city, is the second largest city in Bavaria and the capital of Franconia. To this day, the city’s skyline is still dominated by the mighty fortress built around 1140 during the reign of Emperor Konrad III. Nuremberg’s historical mile ends at the castle and features ornately decorated churches, elaborate fountains and the Tucherschloss Museum. In stark contrast, other sites in Nuremberg serve as necessary reminders of the darker years in the city’s long history, such as the Documentation Centre at the former Nazi party rally grounds where the National Socialists staged their processions, as well as the location of the Nuremberg Trials where chief perpetrators were tried and convicted in 1946. During the reconstruction work following the devastation of the Second World War, the style of the old town was maintained. The tour will take you to the most significant monuments and sights in picturesque Nuremberg. Don’t miss the opportunity to visit the romantic Christmas market and taste the world-famous Nuremberg lebkuchen (gingerbread) before returning to the ship. (B,L,D)

Tue, Dec 6: Spend a full day in magical and festively adorned, Regensburg, where time seems to stand still. Following a guided sightseeing walk and lunch on board, visit the royal Thurn and Taxis Palace with a brewery tasting, then revel in the festive pre-Christmas atmosphere filled with the aroma of roasted almonds, and stalls filled with local handicrafts. This evening, join the ship’s captain at an elegant Gala Dinner onboard. (B,L,D)

Wed, Dec 7: Arrive in Passau, also known as the “City of Three Rivers”, situated at the confluence of the Danube, Inn and Ilz rivers. In the heart of the Old Town lies its most known site – St Stephen’s Cathedral, often known as a baroque cathedral with a gothic soul. The impressive pipe organ helps make St Stephen’s a true highlight. In the morning, enjoy the romantic old town with its historic buildings during the course of a guided walk. Then the afternoon is yours to explore the traditional Passau Christmas market. Early this evening, the ship will depart this lovely city and head down river towards Austria. (B,L,D)

Thu, Dec 8: This morning, the ship reaches the UNESCO World Heritage region of Wachau and your gateway to Melk, Austria. Your excursion begins with a visit to Melk Abbey, which is an Austrian Benedictine abbey and one of the world’s most famous monastic sites, built between 1702 and 1736. The abbey’s church and the impressive library with countless medieval manuscripts and frescos are particularly noteworthy. Continue by coach to Durnstein, one of the best-known wine villages in the Wachau, and where you’ll participate in a mulled wine tasting. The ship will be waiting in nearby Weissenkirchen where the balance of the day will be spent on board with stunning views of the passing winter landscapes as the ship proceeds into Vienna. (B,L,D)

Fri, Dec 9: Wake up in the grand city of Vienna today, and set off on a morning tour passing the most beautiful sights of this Austrian capital city. A panoramic drive is followed by a guided walk through the city center where you will get to know Vienna at its fullest. Begin at the well-known Hofburg Imperial Palace, walk along the Kohl market and finish at Vienna’s iconic St. Stephen’s cathedral. This afternoon, tour the magnificent Schonbrunn Palace and the splendor of its Christmas market. The forecourt in front turns into one of the most elegant markets, with wares of exceptional quality. This evening, enjoy the “Sound of Vienna” concert, which will present a kaleidoscope of Viennese classical music. (B,L,D)

Sat, Dec 10: Disembark the ship in Vienna after breakfast and transfer to the airport for your flights to Chicago.  Arrive to Chicago in the evening and transfer back to Indianapolis. (B) 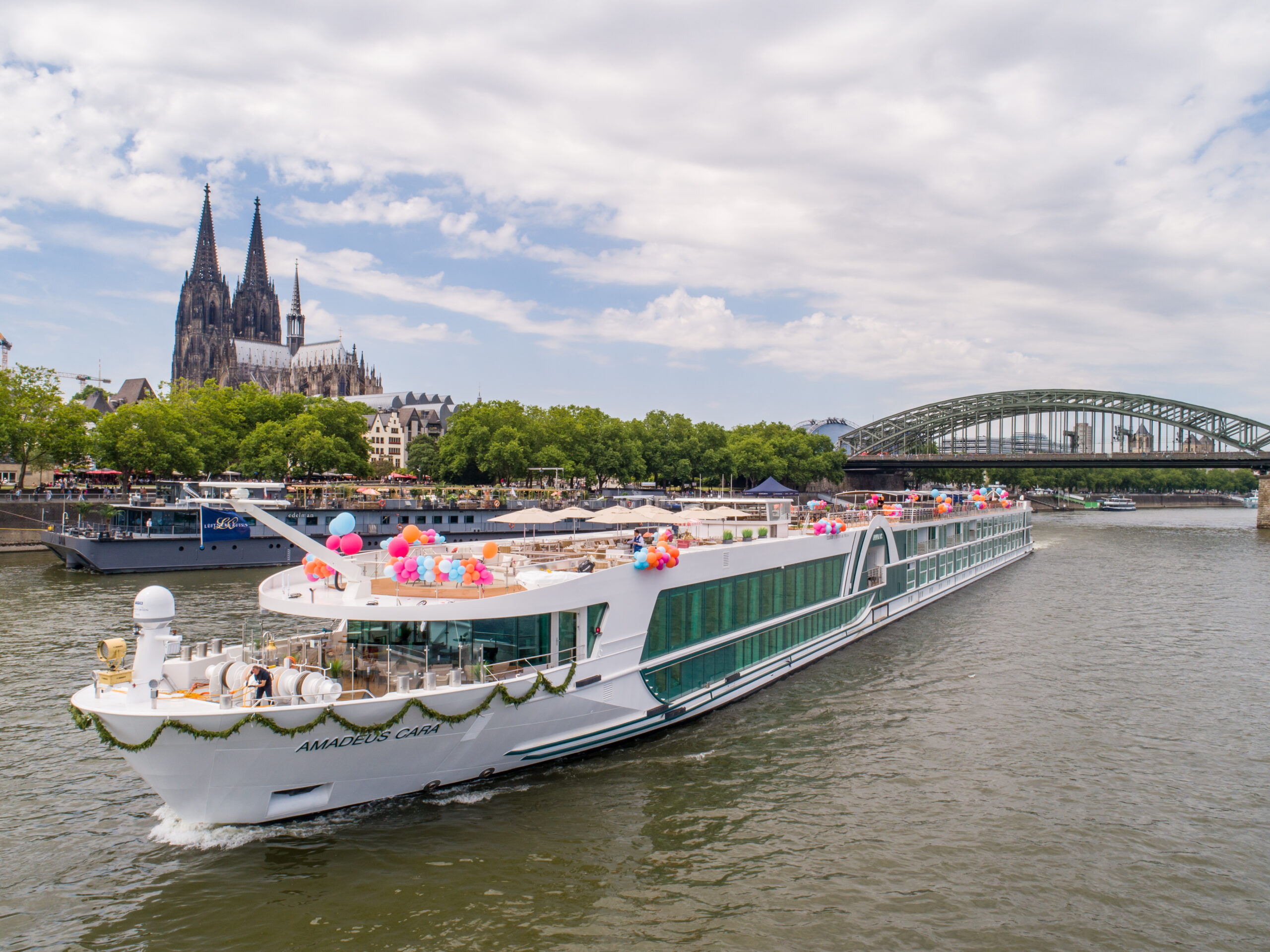 Ship Highlights: Services of an experienced, multilingual Cruise Director, Gourmet dining with all meals included (buffet breakfast, lunch, dinner and midnight snack) in the elegant Panorama Restaurant, Free-flowing quality red & white wines from Europe’s famous wine regions, draft beer and soft drinks as well as coffee and tea with every lunch and dinner on board, 24-hour complimentary coffee and tea station, Cocktail Reception, Welcome Dinner and Captain’s Gala Dinner, Complimentary WIFI onboard, Complimentary bottled water in cabins, Special onboard entertainment including lectures, cooking demonstration, onboard music performances and nightly music by the AMADEUS Duo in the Panorama-Bar, Complimentary state-of-the-art audio headsets for all excursions, Complimentary use of onboard bicycles, Non-smoking environment (smoking permitted on the Sun Deck).

* Subject to change due to fuel surcharge.