5 Highlights of Traveling to South Africa

Traveling to South Africa is a once-in-a-lifetime adventure. From stunning national parks to thundering cataracts, South Africa is sure to leave any well-seasoned traveler struck with awe and wonder. Whether you’re interested in seeking out the “Big Five” on an African safari or relaxing on a railcar as it travels through the vast, stunning wilderness, there is something for every traveler to enjoy. Check out these five must-see destinations on your next visit to South Africa! 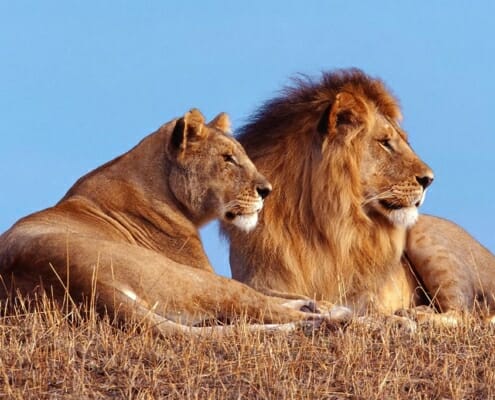 Embark on a Safari in Chobe National Park

One of the biggest draws in Botswana is the famous safari in Chobe National Park. This national park is known for having the largest concentration of African elephants. These beautiful creatures tend to gather at the riverfront during the dry season. Most tourists aspire to see the “Big Five” which includes: African elephants, lions, leopards, cape buffalo, and black rhinos. These animals are commonly referred to as the big five because early hunters considered them to be the most dangerous animals to hunt on foot.

Typically, lions can be found lying in the road during the early morning hours after a long night of hunting. Conversely, leopards are one of the harder animals to find. They usually sleep in trees during the day. Due to their camouflaged coat, they can be hard to spot because they blend into the leaves. Additionally, black rhinos are rather difficult to spot. In fact, there are two types of rhinos in the park, black and white rhinos of which both are actually gray in color. White rhinos are typically easy to spot, and have wide lips. They got their name through miscommunication where the British misunderstood the African term “wyd” for white. The white rhino is not part of the big five because they are generally peaceful animals. However, the black rhino, which has a hooked lip, is much more difficult to spot because only a small amount still exists. However, one of the easiest animals to find is the Cape Buffalo because they can be found in large herds. Although they are easy prey because they gather in packs, if a male cape buffalo is found alone, he can become extremely dangerous. Finally, the most common animal to find is the African elephant. Female elephants can be found in large herds with their young, while male elephants can be found roaming the brush alone.

Although the big five is the biggest draw to Chobe National Park, many other intriguing animals can be found on your safari. Some of the most exciting animals include giraffes, hippos, and zebras. 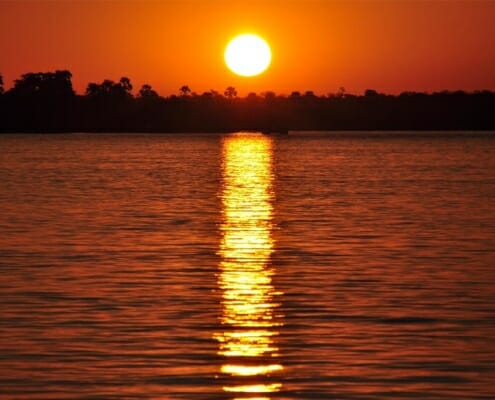 Set Sail on the Zambezi River

The Zambezi River flows through six African countries including Zambia, Zimbabwe, Angola, Namibia, Botswana, and Mozambique. At 2700 kilometers, it is the fourth longest river in Africa following The Nile, Congo/Zaire, and Niger Rivers. Although the river flows through six different countries, it is not a major means of transportation because of the many waterfalls, cataracts, and gorges that exist along it. The Zambezi River is often referred to as the “River of Life” because it is essential to the life and success of surrounding civilizations. The Zambezi River offers access to irrigation, fishing, and other crucial chores. Tourists are often intrigued by the Zambezi River because it contains sharks which are typically found in oceans instead of rivers. It is home to the Bull Shark or “Zambezi Shark” which swims upstream from the Indian Ocean.

Over 500 million liters descend per minute from Victoria Falls making it the largest curtain of falling water in the world. A Scottish explorer discovered the falls, and named it after Queen Victoria. Victoria Falls is designated as a UNESCO World Heritage Site, and is considered one of the seven natural wonders of the world. It is made up of Devil’s Cataract, Main Falls, Rainbow Falls, and Eastern Cataract where it can be seen from Zimbabwe and Zambia. It is locally referred to as Mosi-oa-Tunya which translates to “the Smoke that Thunders.” It gets its name because mist rises more than 100 feet from the top of the falls providing the illusion that smoke is rising out of a hole in the Earth. 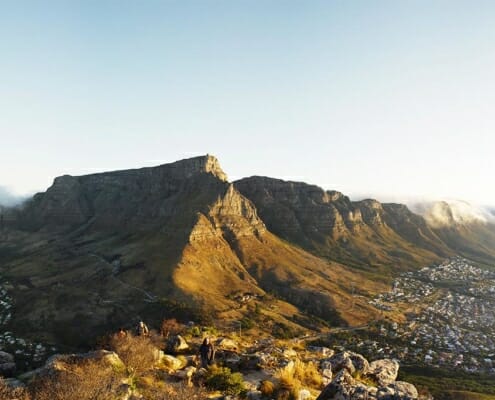 Journey to Cape Town by Rail

Step back in time as you travel to Cape Town aboard a deluxe railcar. Experience extraordinary sights and old-world luxury that are typically only found in classic literature. As you explore the vast expanse of wilderness of Great Karoo, time begins to slow down. The world around slows to a halt allowing you to take in the breathtaking sights that surround you. Witness beautiful grasslands and magnificent mountain ranges. A trip to Southern Africa is incomplete without a train ride through its massive, remarkable landscape. 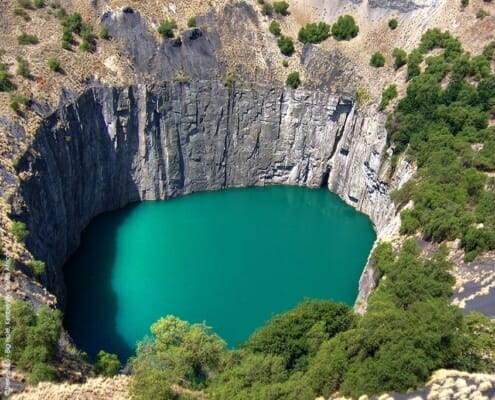 Detour to the Big Hole in Kimberley

Interested in traveling to South Africa? Join Ambassadair for our upcoming trip to Botswana, Victoria Falls, and South Africa in September 2019. Ambassadair Travel offers international group tours with predetermined itineraries that are sure to cover the most iconic attractions at each destination. Explore alongside one of our Ambassadair Travel Directors who is there to assist you with any and all of your travel needs. So pack your bags, and get ready to explore Botswana, Victoria Falls, and South Africa with Ambassadair. Interested in group travel to another destination? Check out all of our upcoming group tours here!