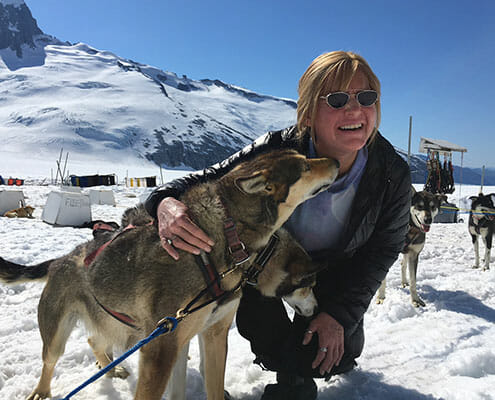 Beth Anne was born and raised in Indianapolis, Indiana and acquired her passion for travel at a very young age. She began traveling to foreign countries with her parents from the time she could walk. In high school, she travelled to Europe as a “People to People” student ambassador and the pattern was set. She attended Northwestern University and double-majored in Communications and Economics. During her junior year, she was chosen for a foreign-exchange program to Paris and earned a work-exchange award in Finland that following summer.

After graduating college, she moved to Los Angeles, California where she worked in the film and television industry for 10 years during which she continued to travel for production work. Upon her return to Indianapolis, Indiana several years ago, she began a new career path planning and managing special events. Concurrently, she began planning and leading humanitarian trips overseas. This added an entirely new element and purpose to her lifelong travels and further reinforced her love of exploring cultures and global influence.

Beth Anne then discovered travel-directing as a career, and felt she had found her bliss. She continues to lead tours, combining passion with work. Her most gratifying experiences still involve travel. She loves to read and write poetry, and practices yoga. She has enjoyed photography since she was very young, and is still passionate about films. Beth Anne believes that travel keeps us young at heart, open-mindedness leads to world peace, and that we are all ambassadors of goodwill when we travel.

Favorite Quote: “I would rather own very little and see the world, than own the world and see very little of it.”